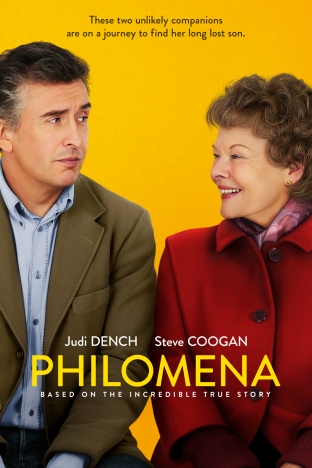 One of my favorite films of the year has been Philomena. It is a beautiful story about a journalist who tries to find Philomena’s son. Philomena was sent to a convent by her father after becoming pregnant. While in the convent, she gave birth to a son who was then forced illegally into adoption and Philomena was never able to say goodbye to him. 50 years later, Philomena tells this painful secret that she has kept for so many years.

The film is difficult to watch at times. As a person who deeply loves the Bride of Christ, it is painful to see the wrongdoings of the Church. There are an approximate 60,000 women in Ireland that were forced to give up children because they were unwed mothers. Not only that, the Irish government has refused to release the records of these children and the adoptive parents. But Philomena is fighting within the church to see change. She even recently had an audience with Pope Francis.

Philomena Lee has said, “You can’t go through life being so unyielding …so you’ve got to forgive. You’ve got to. You just have to forgive.” This is a seemingly easy concept to live by when the pain the Church causes you is “mild.” Forgiveness is a little more difficult when the Church forces you to give up a child.

But no matter what the pain, “we can’t go through life being so unyielding.” Why? Because we are really being unyielding against ourselves. The Church is a community of people. And each of us make up that community. So when you are angry at the Church, you are, in a way, angry at yourself.

So the church said something with which you disagree? I’m sure no one has ever disagreed with you…

So the church hurt you? I’m sure you have never hurt anyone else…

So the church lied to you? I’m sure you have never lied to anyone…

The sin of the Church is the sin of its people. Our greed, corruption, manipulation, and selfishness is the sin. The Church is not some unknown group of people. It is you. It is me. And we have all made countless mistakes.

Many of us inside of the Church seem to think that there is some extravagant evil force that is trying to destroy it. This may have some validity but I think it gives far too much credit to that which Christ said, “the gates of hell will not be able to overcome it.” I think we are doing a pretty outstanding job on our own of destroying the church. I’m guilty of this. Sometimes in the pursuit of trying to create something that resembles the Bride of Christ, I find myself trying to destroy the Bride of Christ to create something that resembles Caleb Trimble. I need to learn that balance.

When we throw stones at the Church, we really just hurt ourselves. We cannot go through life being so unyielding. We just need to learn how to forgive. How do you learn to forgive? Remind yourself of what it was like to be on the other end and needing forgiveness. Remember the relief you felt when someone said those three incredible words, “I forgive you.” Remind yourself that you are a part of the thing that you are destroying.

I think we can learn something from Philomena. She was deeply hurt by the Church and yet she kept her faith in God and in the Church. She chose to forgive rather than walk through life being bitter toward it. Perhaps it is because she realized that she would really just be mad at herself. How beautiful would it be if we were quicker to forgive than we were to cast stones from our tower of righteousness? Or see how we have wronged people instead of seeing how the Church has wronged us?

4 thoughts on “The Sin of the Church”