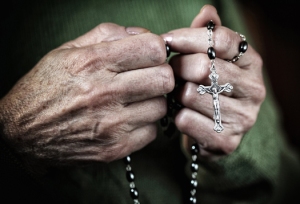 “I wish I had more faith.” I have said that to myself so many times in the past year. But haven’t we all said that numerous times? I think many of us are afraid to admit that we want more faith. It is something we pray in the dark, but something we would never admit in the light.

But if someone were to ask me what I wanted from God, I would simply say, “more faith.” I don’t want a job, money, security, more friends, more knowledge, more power, health, safety, or anything else that I should ask for. Instead, I just want more faith.

I wish I had more faith in finances. As I was talking with friends who were doing a church plant, I told them that I wished I had the faith that they had to go out and raise their finances. They just packed up their lives, moved across the country, and trusted that God would provide. In reality, this is an idiotic concept. People who do this usually end up on the street. And in this economy? They must be asking for poverty. But sure enough, God has provided for them. Sure, it has been difficult, but He has provided.

I wish I had more faith in my prayers. When talking to one of my friends about prayer, she said that she prays for the impossible and God always provides. In reality, this is an idiotic concept as well. You are speaking to an invisible being? How is this different than a child and his/her imaginary friend? But sure enough, she has faith that her prayers will be answered. It would be nice to believe that prayers would be answered. But it is difficult to believe in answered prayers when all you can recall is unanswered prayers.

I wish I had more faith in my career choice. I speak with many friends/mentors who know that they are doing what they should be doing. They have received affirmation from other friends. They know because of how the doors were opened to where they are now. They know because of the impact they are making. But what about those who don’t have jobs right now? Are some people called and others aren’t? Is God looking out for some but not for others? Did some people pass God’s test but others didn’t?

“God, I know I have seen Your works before. God, I know that you are still working today. But if you could help me out a bit and remind me of what it is like to see you work, I would appreciate that. Because right now, you seem like a vivid dream. I can’t remember if you really did what I think you did.”

That was a dark place. That entry still strikes a chord with me.

The reason we pray for more faith is because a mustard seed is too small. Or at least that is what we think. We are uncomfortable vocalizing our doubts and fears because a mustard seed appears small. We will pray for more faith in the dark but refuse to talk about it in the light. Instead, we put on a mask that we trust in God for everything. In reality, we may be hanging by a thread. We can’t let people know that, though. Otherwise, they will think of us as “less” of a believer.

Perhaps less faith is more faith. Perhaps it is better to have the mustard seed.