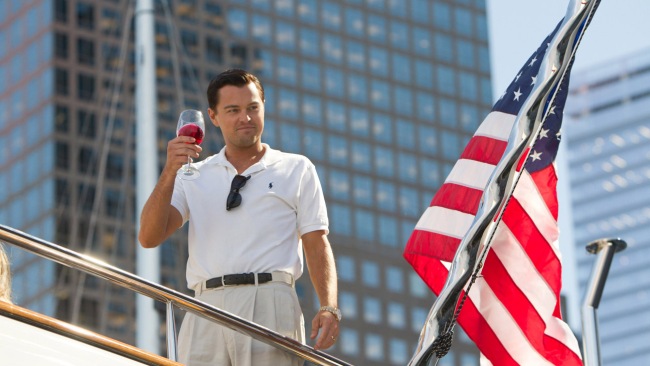 I’ve been debating writing a review of Scorsese’s recent film, “The Wolf of Wall Street.” It is a film that is filled with f-words, nudity, and drugs. That’s usually how Christians categorize it. Unfortunately, we neglect one of the most heinous of sins that it portrays…consumerism and greed. I love movies and I love Scorsese films. He never disappoints. This film, in my opinion, is a genius portrayal of what consumerism and greed does to our lives.

When I watch films like this, I try to base my judgment on character development. This film far exceeded my expectation (which is bizarre considering I’ve never been disappointed with a Scorsese/DiCaprio combination). The film is based upon the life of Jordan Belfort. He was a self-made man who ran penny stocks, one of the largest scams in the financial market. As a man driven to succeed, relationships and ethics were quickly thrown out the window in order to make as much money as possible.

The entire film centers around excess. There is excessive language (over 500 f-words), nudity, sex, drugs, and money. The movie is excessively long (clocking in at about 3 hours). And through the excess, we see a genuine portrayal of the contemporary consumeristic mindset. We learn the hard truth that money truly can buy you almost everything in this country. It can even buy your way out of prison. And where we want to say “that shouldn’t happen,” we are left with the depraving fact that it is, unfortunately, the truth.

Belfort is not painted as an individual we should aspire to be. He is obscene. He is vulgar. He is over the top. The film acts as a personification of those characteristics. Audience members are subjected to that lifestyle and they should know that going in to the film. It is far more than a biopic. It goes deeper than that. Scorsese appreciates art and that is seen, albeit obscenely, in this film.

I am by no means advocating the use of extensive sex, drugs, and language. Just like I don’t advocate the use of extensive violence (as seen in films like Saving Private Ryan, The Departed, Inglorious Basterds, or Django Unchained), a false view of romance (as seen in every single romantic film released to date), or consumerism (as seen in Wall Street, Hunger Games, or The Dark Knight trilogy). I don’t advocate much of what I see in contemporary film; but then again, just because something is portrayed in a film doesn’t mean it is acceptable. Too often, I fear Christians have the tendency to “christianize” sin so that it can be portrayed in film. We see this in many contemporary “Christian” films. What happens is we subject people to a false sense of sin. That’s the biggest complaint I have with Christian film (well, that and the fact that they have no idea how to develop characters).

Christians long to see justice. I long to see justice. I want to see good characters thrive and evil characters suffer consequences for their actions. Of course, explored further, this is an errant thought of humanity. When we don’t see that in a film that has already subjected us to so much inappropriate material, we get upset. The same is true for The Wolf of Wall Street. We are subjected for 3 hours to Belfort’s and see no resolution, really. There is no payment for his wrongdoings. The closest thing we get for remorse is the scene when Belfort, who was extremely inebriated, tries to take his daughter away from his wife. He backs the car into a wall and we see a glimpse look in Belfort’s eyes that portrays remorse for what his life had become. That thought doesn’t last long This is frustrating to the viewer because he/she wants to see some form of redemption in his life.

Unfortunately, there was no redemption in his life. Belfort still lives promoting an agenda of greed and loose morals and ethics. His life is a representation of consumerism and Scorsese captures that beautifully in his film. The film begs a poignant question: is the pursuit of success worth all of this? Belfort loses family, friends, innocence, possessions, control, and much more for his pursuit of being on top. He is a man that regrets nothing because it is hard to regret things when your primary pursuit is something that is selfish. He buys into the mantra from Gordon Gecko that “greed is good.” And he doesn’t regret that thought. No matter what the loss, he considers his life successful because of all the temporary fame he achieved.

The film led me to question my own stance on consumerism. Had I bought into that line of thought? It’s appealing at times. You can have your own helicopter, boat, lovers, vices, and anything that you could ever dream of. You can have it all. As long as you are willing to sacrifice it all for that dream.

My problem with consumerism (outside of it being against Scripture) is that it blends in all too easily with American evangelicalism. From the days of the health and wealth gospel to the multi-million dollar church buildings to the church services that give most concerts a run for their money, consumerism blends in all too easily with American evangelicalism. Many have bought into the idea that bigger is better. Our services, sometimes, even echo that. And we justify it by saying that we will do whatever possible to bring people to Christ. But is that a good justification? Is that a right justification? Is that a Biblical justification?

Do I condone the content in The Wolf of Wall Street? No, of course not. After watching the film, I immediately thought, “oh my gosh, I can’t believe that all of that was in an R-rated film.” Would I recommend the film to everyone? Of course not. There are several films that I think beautifully capture the state of humanity but shouldn’t be viewed by everyone. I see the artistic ability in being able to tell the story of a person not only inhis/her life and relationships with people but also in content and aspects of the film. It doesn’t mean I support that way of thinking. I wish that things were different…but they aren’t. Consumerism is still a problem that we are battling every day. And before we casta stone, we must first analyze our own lives.

Because the truth is:

I am Jordan Belfort. I want so much more. I have been tempted to sacrifice ethics for my own success. I have given up relationships if they stood in the way of my goals. I have done things I told myself I would never do. At times, I am no different than Jordan Belfort. Seeing The Wolf of Wall Street showed me that. Consumerism is something I struggle with every day. I constantly battle with the thoughts of “what do I need” versus “what do I want.”

Most of us are Jordan Belfort. Seeing it portrayed in a film showed me that ugly truth. Being subjected to everything showed me the nature of evil and how it slowly hardens your heart to where you need more to operate. Not seeing resolution showed me the unfortunate truth of humanity. Not seeing justice made me long for the day when justice will come to fruition. I pray in that day, however, that God shows me grace for being such a worthless schmuck at times.

My review? Albeit an obscene film, it might be one of the best films when it comes to capturing how many of us operate…even those of us who proclaim Christ. I want to make myself clear: I do not condone the behavior in the film. But I also don’t condone that behavior anywhere and yet I see it all the time…in my life as well as in many other lives.